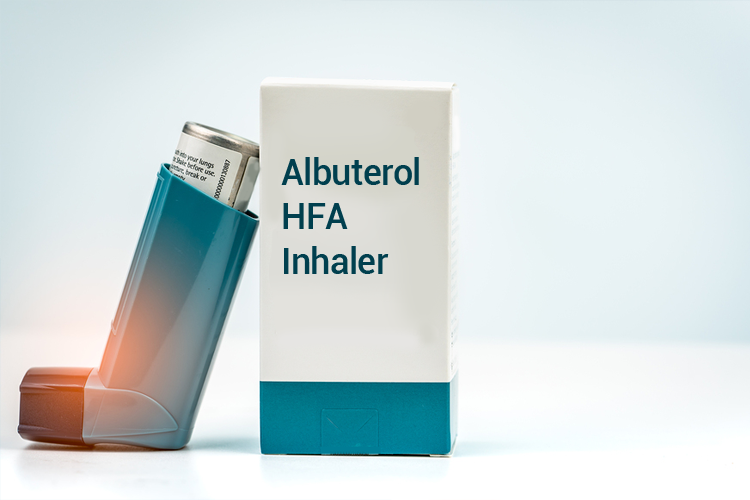 Albuterol (also known as salbutamol) is a prescription drug which is It is used to treat asthma, including asthma attacks, exercise-induced bronchoconstriction, and chronic obstructive pulmonary disease (COPD)

It is marketed under Brand Names ProAir, Ventolin, Proventil, or Aluberol HFA. Asthma is a long-term disease of lungs which causes inflammation and narrowing of airways that makes breathing difficult.

Albuterol belongs to a class of drugs known as bronchodilators. It works in the airways by opening breathing passages and relaxing muscles, allowing more air to flow into the lungs.

It is also known as a short-acting beta agonist (SABA) as the medication quickly relieves the patient of asthma symptoms by opening the airways.

Albuterol inhalers are preferred because:

Albuterol starts its action within minutes after inhalation and is often prescribed  before exercise to prevent exercise-induced asthma. Albuterol can also be used in a nebulizer in the form of a liquid to treat an acute asthma attack at home.

The medication may cause side effects such as headache, nausea, and anxiety but usually the benefits of the medication outweigh the risk of side effects. Follow-up care is important for best treatment outcomes, so make sure to go to all appointments and call your doctor if you have a problem.

The inhaled form of albuterol comes as a metered-dose inhaler (MDI) and liquid for compressor-driven nebulizers.

Important information about Using the inhaler

The drug usually comes with a Patient Information Leaflet with illustrated directions of its proper use and cleaning of the mouthpiece.  You may need to prime the inhaler device before first use. Priming is spraying the medicine into the air before the first use, it will allow for an accurate dose when you inhale it. Follow the priming directions that come with this medication for test sprays if you are using the inhaler for the first time. Remember to shake the canister well before use.

Generic albuterol is covered by most insurance plans and Medicare, and if you need an extra inhaler for your gym bag, school, or purse save with SaveonMeds drug discount card. With SaveonMeds discount drug card, ProAir or Albuterol HFA may be purchased with a 50% discount at over 65,000 network pharmacies. In addition, SaveonMeds drug discount card can help those with high deductibles or copays. as it can be used to get the medicine at a highly discounted price without having to change pharmacies.  SaveonMeds can help reduce your medication related costs. If you need a digital SaveonMeds discount drug text the keyword “SaveonMeds” to 21000. It is issued absolutely free of cost with no renewal charges and no age limit or purchase limits.

Visit here to check drug prices where you will find information about the retail price and SaveonMeds coupon price of various drugs including albuterol drug prices along with the percentage savings when you fill your prescription with SaveonMeds drug card.

Disclaimer: The information and content posted on this website is intended for informational purposes only and is not intended to be used as a replacement for medical advice. Always seek medical advice from a medical professional for diagnosis or treatment, including before embarking on and/or changing any prescription medication or for specific medical advice related to your medical history.